Alternative Vietnam: a vacation alongside the locals


Vietnam is a destination that is still little touched by mass tourism but that certainly has much to offer to all types of travelers, including those who can not give up comfort.
What to see during a trip to Vietnam and how to experience it in close contact with the locals?
A trip to Vietnam can begin with a visit to its capital Hanoi, in order to shift right after towards less touristy pathways. Hanoi is a picturesque and unique city located in the north of the country and surrounding the lake Hoan Kiem on which hovers an ancient legend: it seems that a warrior who fought and defeated enemies to achieve independence, has succeeded thanks to the sword given by the God Turtle. Legend has it that after independence were obtained, the Turtle God emerged from this lake in the form of a turtle for the return of the weapon.
Besides the lake, in Hanoi, you can admire the Temple of Literature, a building dating back to the year 1000, as well as the first seat of the Vietnamese University and the spectacular Pagoda with a single pillar, a unique building built near the Mausoleum of Ho Chi Minh, the national hero who made Vietnam independent and thus allowed its unification. 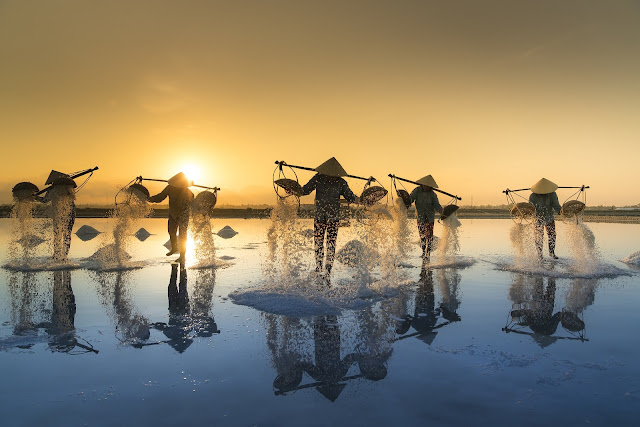 If during your travels you like to discover unique and less frequented and unusual natural landscapes, make a stop in the area of Sapa or Mu Cang Chai, always in the North of the country. Here, you can admire a vast extension of beautiful terraces where rice is grown dotted with small villages of farmers. Here you can find some holidays apartment in Vietnam to live like the locals.
The best time to enjoy the spectacle of the intense yellow colour of the rice fields is at the beginning of September, while in spring and summer the terraces are completely flooded but offer the same unique view.
After having left the North, there is able to direct toward the south of the Country (also with internal flight if you don't have many days to disposition) in order to catch up Ho Chi Minh City, the legendary Saigon, that is introduced like a lively and modern metropolis but under its sparkling lights it hides the memories of its tormented past. In this city  visit the pagoda An Quang, a place of Buddhist worship where peace and silence reign supreme. Did you know that there are still some traces of the French domination? No? Well, maybe you should go and visit the Cathedral of Notre Dame here in Ho Chi Minh City, city capable of surprising thanks to its melting pot of cultures, traditions and religions that now finally coexist in harmony.
To live, instead, the Vietnamese nightlife in the middle of the local you can go in Pham Ngu Lao Street, an area full of shops, restaurants and bars meeting place of many tourists and expats.
During a trip to Vietnam it is essential to stop in Hue, its ancient imperial capital where history, religion and mysticism come together to give the visitor a wonderful glimpse of this nation and understanding of the local culture.
Hue was the capital of the Empire of the Nguyen dynasty from 1802 to 1945 and here you can admire the Imperial Citadel declared a UNESCO World Heritage Site for its particular urban structure built according to a precise symbolism. This Citadel is, in fact, protected by 7 ramparts 10 meters wide interspersed with 10 towers and 10 doors and inside there are buildings arranged according to the 5 cardinal points of Vietnamese culture, ie north, south, east, west and center that correspond to five elements, earth, metal, wood, water, fire that in turn respond to various colors.

Another charming thousand-year-old city in Vietnam is Hội An, whose historic center has been declared a World Heritage Site by UNESCO: it was the most important commercial port of Vietnam thanks to its strategic position along the estuary of the river Thu Bon, and was frequented by Chinese, British, Dutch, Portuguese, French, Spanish, Indian, Filipino, Indonesian, Thai, Japanese, traders. In particular, Japanese and Chinese people arrived in the city in spring with the right wind and left again in summer, staying in the city waiting for the monsoon winds to bring them home. These two, therefore, are the two civilizations that have influenced most architecturally and culturally the community of Hoi An. Hoi An flourished until the end of the 19th century when the river flooded with mud and the commercial port was transferred to Da Nang, 30km further north.

Since then, time has stopped at Hoi An. The city has remained crystallised as it was and thanks also to UNESCO, which has suspended and limited the architectural development, Hoi Ab has come to us almost intact, as it used to be.

Are you wondering where to sleep in Vietnam on the sea? It is strongly recommended a stop at the Ha Long Bay, in Vietnamese the bay where the dragon descends into the sea, another location included in the UNESCO World Heritage Site. From the emerald water of this spectacular bay emerge rocky spurs of various shapes and there are over 2000 islands and islets that combine to create a breathtaking scenery that will allow you to sleep in Vietnam on the sea.

Vietnam is a country with many different climates that vary widely from north to south and depending on altitude, but there are a few months a year that are can be considered ideal to visit entirely: the months from September to December (autumn) and March to April (spring) are in fact the best time to go to Vietnam and avoid the monsoon rains that characterize the rest of the year. South Vietnam: Dry season from December to April-May and rainy season from May to November. In any case, the rains are often and willingly concentrated within a few hours during the day
Central Vietnam: The rainy season starts around November and generally ends in December-January.  November is instead, along the coast, period of typhoons. However, August - November is instead, along the coast, period of typhoons. The best time to visit the region is from February to July.
North Vietnam: The best time to visit is from October to December, with warm, sunny days. Then it starts to get "cold". The dry season begins and lasts until April-May. The rainy season is approximately from May to September.

Hi! Thanks greatly for your useful sharing! I am really into your experiences.
I can see that you have such a wonderful trip there in Vietnam. If you wish to read useful traveling tips to Southeast Asian countries, you can visit Where to go and what to eat in Laos. GoAsiaDayTrip Blog is one of the best travel blogs based in Hanoi sharing experience to Southeast Asian countries.
Hope that you can visit our country - Vietnam one day.